You may not have noticed it in between all of the Olympic news, but the Netherlands won a gold medal also on the European Championships this weekend. In the Italian snow of Millegrobbe, about 30 kilometers northeast of Lago di Garda, the European Championships Sled dog races were held, and Stefan and Ilse Donker from Zevenbergschen Hoek in Brabant succeeded after three exciting days to reach the highest place  in the Sprint class for teams with 6 dogs. Stefan Goris from Belgium won the silver, Kati Dagenais from Canada was third, but competed out, because a Canadian can not win during an European Championships. The bronze went to Jiri Trinka from the Czech Republic. Dogzine congratulated the winner and spoke with him ...

Stefan participated in the sprint distance for six dogs. In this kind of championships you have several classes, such as the Skijöring (one dog and the athlete on skis), the class sled with 4 dogs, sled with 6 dogs, with 8 dogs and the class unlimited, where you have as many dogs as you want for the sled. Each form also has its own distances, skijoring (same distance as 6 dogs class) and four dogs run about 8 kilometers, the six dog class between 11 and 15, in this case 12.5 kilometers, 8 dogs go 16, 17 kilometers and the open class has to cover 231 kilometers of trail. The times of three days added together form the final time, and the fastest wins. But, as Stefan also says, "You are as fast as your slowest dog", so more dogs do not automatically mean a big advantage.

Walking in snow is certainly not very common for Dutch teams, because there is not much snow here. And mountains, above 1500 meters, are unknown. It was not for nothing that Stefan and Ilse went to Austria at the beginning of February to first ride the Alpirace, a stage race over 6 days of which three in Austria and three in Italy (also in Millegrobbe). And that race was also a number one succes for the Dutch team. "Once arrived in the snow, we trained for a week and a half to prepare the dogs for the European Championships as much as possible."

Stefan and Ilse do not use the traditional four dog breeds for races, the Malamute, Siberian husky, Samoyed or Greenland dog, but use their own bred hound. "We race in the open circuit, the formula one of the sleddogsport, and we race with a mix of breeds, especially the hunting dog is in it, the collective name is hound. In the long distance races like the Iditarod, they use dogs with a higher percentage husky in the genes, that they call the Alaskan husky. The dogs we have do not all look the same in terms of construction, they do have a pedigree, it is not official, but it is all documented. This type of dog has been bred for more than 80 years, and what we are trying to do is to get the ultimate sled sport dog. "This type of dog has, apart from speed, an advantage, they are more social than the other breeds, easier to train and a bit more easy to handle. "You can  leave them in the forest as a group without being away for hours."

The race itself was very exciting. The first day everything went well with Stefan. "Some teams had a bit more trouble, new snow had just fallen, and we had a very good run, I started last, overtook two teams on the way, and at the finish I was first with 26 seconds ahead of number 2 , a good position. "But, that's the way it is, whoever finishes fastest leaves the next day first, at an European Championship at 1-minute intervals on the next team. The first team must therefore make the trail. "Then you are the hare," says Stefan, using a dutch proverb, because the snow is heavier at first.

And there was another disadvantage, because one of Stefan's dogs was not fit. "My most important dog, the oldest, who normally comes first, had been in heat in December and was not fit psychologically. At the start she was enthusiastic, but during walking she was not focused, the leash was not always tight, and dogs should go with pleasure, if they are not  you should not burden them. So I had to take that dog out and a dog for whom this is the first season should take her place, And then it is completely difficult. "

But fortunately it all went fine up to a mile before the finish, and the competition remained remote. Then, when passing a hill, number two came right behind Stefan and started crying out loud to scare Stefan's dogs. "They did not scare, but it gave me the opportunity to choose. He was close behind me, I could see that he was about half a minute behind. So I could take it easy, and let him catch up. So he had the fastest time in two days, and he had to be the first one the third day. "And so, on the third day, Stefan had the advantage of not having to take a trail. Something that the number two also repented.

With this strategy the difference on day three was only 12 seconds, and starting from the second place is just fine. With the result, the gold at the European Championships was for the Dutch.

The sled dog season is short, in September the training starts, around the end of March it will end. Workouts that start with small, four-dog teams for a heavy cart through the Brabant woods. First 3, 4 kilometers to build up, then more and more, and in larger teams. A combination of interval training with endurance. And once it gets really cold, December, January, the dogs are in top shape.

For Stefan and Ilse, Millegrobbe was the last game of this season. "It's a hobby, the work has to be done again, the days off are gone." The dogs are allowed to play for the summer and play in the garden and pool. But the challenge for the next cold season is already there, the WC in France. The IFSS (International Federation of Sledgedog Sports) organizes these in Bessans (between Grenoble and Turin), together with the Lekkarod Association. The latter is the European variant of the Iditarod from Alaska, and has 9 stages in 9 days, each of about 40-50 kilometers. For lovers, the 2018 version of the Lekkarod takes place between 14 and 22 March, in the vicinity of Bessans. The dates for the World Cup are not yet known.

Oh yes, besides the snow variant there is also a dry land version, with carts and over "dry" ground. In 2019 it will be held in Latvia. We will keep you informed. 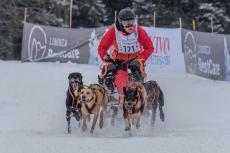 The Dutch take the gold at the European Championship Sledgedogracing

The Dutch take the gold at the European Championship Sledgedogracing

Germany: No shows for dogs with extreme harmful features
Anger in Portugal over police crackdown on fire in asylum
Coronavirus affects the dogworld (update 13-3)
END_OF_DOCUMENT_TOKEN_TO_BE_REPLACED