I’m not talking about the breakfast cereal humans eat. I’m talking about those loud, sometimes colorful things that fly up into the sky at the end of every year. I think you call them fireworks.

I’ve been with Codee for two years now. That means we’ve been through two new year celebrations together. I hardly remember the first year. The loud pops and bangs didn’t really bother me. I slept through most of the evening. I do remember the yummy snack toys I got at midnight though. I was busy getting the food out of them while the human watched the pretty display from the hallway behind a window.

The second year was different though. Something changed in June 2019, which changed my human’s life. She got her first hearing aid.

For the most part, that’s a good thing. It means she can easily communicate with her friends and family. But it made new year’s eve and the days preceeding it, a nightmare.

Fireworks went on sale on 28th December and we knew about it very quicky. As soon as the shops went open, we heard nothing but snap, crackle and pop. Though I’m not trained to protect my human, I have a natural instinct to do it anyway and her reaction to the sounds, told me she needed it.

She really can’t deal with unexpected loud noises. She has this weird muscle reflex reaction that tells me when a noise scares her. It made me very alert. I spent hours laying and listening to every sound to make sure we were safe. I tried laying next to her, on top of her and if I could have laid under her, I would have tried that too. The more she reacted, the more I reacted and the more I reacted, the more she reacted. It was a vicious circle that prevented me from getting sleep. Which eventually meant I couldn’t help her with physical tasks. It made us all very sad and frustrated.

On new years eve itself, she was clever enough to leave the hearing aid in its box. Less reactions from her, meant I was calmer and slept more. When midnight came, I took sanctuary with the caregiver in bed. We slept. The human tried to watch the pretty display as she does every year, but there was so much mist, there was nothing to see. So she also went to bed.

New year is supposed to be a happy time for animals as well as humans. For us, it wasn’t happy. There are many dogs out there who are afraid of fireworks. Some, including service dogs get injured and can no longer do their work. Even though I wasn’t injured, I still couldn’t work. There are also humans afraid of these things and they’re unable to function on new year’s eve because of it.

I really wish there was a way for everybody and every puppy to bring in the new year without being afraid. If there was, everyone could start the new year off with a little positivity. 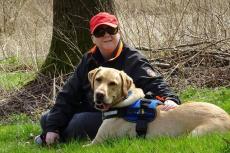 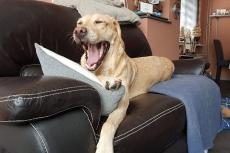 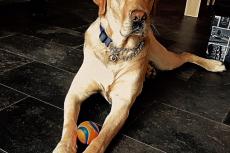 More fear and agression after neutering
Gezondheid
FDA warns for side-effects Bravecto, nexguard etc.
Gezondheid
Stop the genocide on the Great Dane
Algemeen
Vaccination for leptospirosis: is the vaccin more lethal than the disease?
Gedrag
Dutch Dachshund-breeders, where did it go wrong?.
Fokken